Victory of Mostar in the second round

Tonight, in Jablanica, Mostar Stari Grad beat Dinamo Plus from Moldova with 9:3 in the Group 8 second-round match of the main round of the UEFA Futsal Champions League. 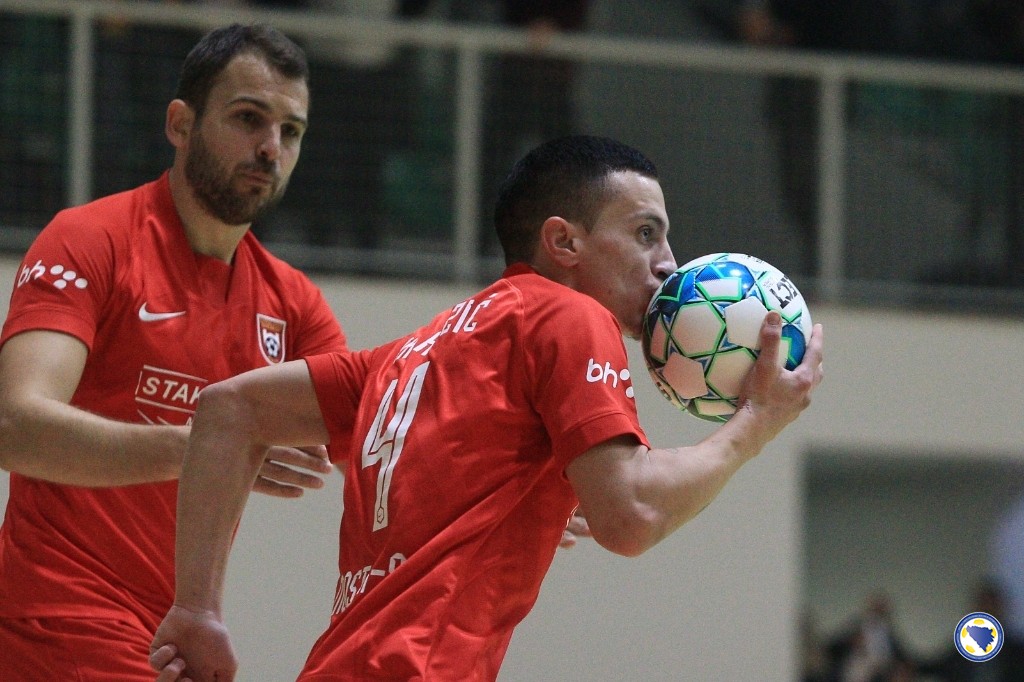 The BH champion came to the advantage in the 8th minute. Adnan Kalajdžić interrupted a pass of Dinamo players at their half and diagonally sent the ball in the net from the right side of the six-meter area. Kostiantyn Bondarenko equalized for the Moldovans in the 9th minute.

Predrag Šešelj increased the lead to 2:1 in the 17th minute with a shot from ten meters after the pass of Marin Suton. By the end of the first half, Anel Radmilović also entered the list of scorers in the 19th minute from the penalty spot.

In the 23rd minute, Ievgen Svyrydov reduced the advantage of Mostar. A minute later, Radmilović had a chance and hit the post, but the ball bounced to Bilal Jelić, who was accurate for 4:2.

After that, Dinamo Plus tried to play with the goalkeeper-player, which was used by Nermin Kahvedžić, who took the ball away from his opponents in the 25th minute and hit the unguarded net for a three-goal advantage in favour of Mostar SG. The guests made a similar mistake in the 29th minute too, but this time it was used by Marin Suton and he scored the sixth goal for his team.

After a pass of Kahvedžić from the right side, Radmilović scored the seventh goal for Mostar SG in the 34th minute. Kahvedžić scored his second goal of the match in the 36th minute, and in the same minute, Vitalii Tanskyi reduced the home team’s advantage to 8:3. Our champion performed an excellent action in the 38th minute when Samir Gosto, assisted by Jelić, scored a goal for the final 9:3.

The second match of the group, in which the Finnish and Dutch champions, Kampuksen Dynamo and Hovocubo met, ended in a 2:2 draw.

After two rounds, Mostar SG and Hovocubo have 4 points each, while Kampuksen Dynamo has 2. The last place on the table is occupied by Dinamo Plus without points.

The matches of the third round will be played on Saturday, 30th October, in the Sports Hall in Jablanica. The Dinamo Plus-Kampuksen Dynamo match starts at 16:30 h, and Mostar SG-Hovocubo at 20:00 h.